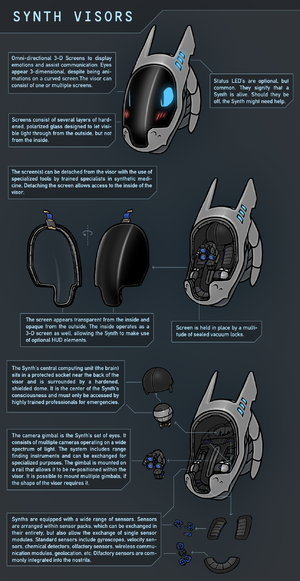 The central processing unit of a Synth is called the Brain. It is a roughly spherical object with multiple prongs protruding from its surface, functioning as plugs. The Synth's brain is firmly plugged into the socket at the back of the Synth's head cavity, where it connects to the neural system of the Synth's frame. The Brain contains the Synth's consciousness, does the majority of computation required to control and power the Frame, processes sensory input, fulfills the role of an interpreter between outside stimuli and perception and is considered to be the most important part of a Synth's body.

Every Synth brain contains one Synth mind, which emerges from the properties of the brain. It is not possible to separate the mind from the physical brain. Since the mind of a Synth is an emergent property of the physical brain, the descruction or malfunctioning of the brain usually means the death of the Synth. It is therefore protected like no other part of the body, with a dense, thick metal frame surround it to shield it from the outside world.

The inside of a Synth's brain is a closely kept secret of the Outer Rim civilization, with only few specialists having a close understanding of how most of it functions. Every brain specialist within the Outer Rim has specialized knowledge focused on specific parts of the brain, such as processing, memory, stimuli interpretation and neural networking. Large gatherings of of engineers and computer scientists are needed to update the design for future generations of Synths. Such update events however are very rare, since the design has been refined and optimized over the course of centuries and the philosophy of "Never touch a running system" applies.

This leads to no single person having a full understanding of the architecture of a Synth's brain. What is generally known to everyone is that it contains processors, memory (with in-memory processing), multiple hard-coded API's and a cluster of closely linked, software based neural networks, which, while powered, generate consciousness. The Brain also contains its own, simple cooling system, which transfers heat towards the outside. From there it is the responsibility of the frame to transfer the heat wherever it is needed, or disperse it outwards. Another important component is an emergency power supply. Should the frame of the Synth fail, run out of power or be destroyed, the brain switches into standby mode and the Synth goes into a coma. This coma can last for several hours until the emergency power supply runs out. During this timeframe the Synth can be revived. Prolonged coma states can cause damage to the cluster of neural networks however, possibly leading to damage to a Synth's skills and abilities.

A very important part about Synth Brains and how the Synth mind works is the concept of separation of conscious and subconscious computation. The Brain is capable of highly complex computation and, as a result of the many interactions of its intricate parts, consciousness emerges. This consciousness would not be possible without the high computational power of the brain, yet the consciousness is not capable of using this computational power consciously. This seems confusing and counterintuitive at first, but is easy to compare to how organic brains function: Organic brains have high computational power and are capable of approximately calculate complex processes without the conscious mind that emerges from it even being aware of it. An organic mind can estimate the ballistic trajectory of a thrown object, like a ball, with enough precision to estimate where the body needs to position a hand to catch the ball. All of that is done without the mind even knowing what a ballistic trajectory is or how to calculate it. Synths function in a very similar way. Many of the functions of their bodies are hidden behind an API layer, which their brain can use subconsciously to fulfill its purpose and function, while the Synth's conscious mind can not access the same API. This is why a Synth has to think for a bit, when you ask them to solve a mathematical equation. Even if the equation would be trivial to solve for a computer, the Synth's mind takes longer to solve the equation and needs to learn how to solve such equations to begin with before it can even attempt to solve it.

Synth brains are blackboxes. There is no way to interact with the running system other than to do so through the Synth's mind. In a way, the only way to find out approximately what is going in within a Synth's brain is to ask them how they feel and what they are thinking about. It is not possible to interface with a Synth brain directly. However, specialized clinics have equipment and specialists that can diagnose and treat certain brain related malfunctions. Such procedures are very rare and strictly illegal outside of a licensed clinic. Any surgical procedure performed on a Synth brain without a license to do so is highly illegal.

Transferability of the Brain

Since a Synth's consciousness is primarily emergent from their Brain, it is theoretically possible to transfer the Brain from one body to another and for the Synth mind to travel inbetween bodies in such a way. This is indeed possible, though it comes with great risks and the possibility of permanent damage to the Synths physical and mental abilities. While inhabiting a body, the mind of a Synth forms strong and complex neural connections with its body. While the consciousness is nested within the Synth Brain, the Brain and body are so interwoven, that the removal from that body would require the Synth to re-learn many of their basic abilities, be it how to walk, speak or eat. This would require a large amount of therapy, but could, if done correctly, successfully lead to a Synth having another chance at life in another body. Due to the high risk and costs involved in the undertaking of a Brain transfer, it is an exceptionally rare event that only happens in emergencies to save special, particularly gifted Synths after accidents that left their bodies unrepairable.

Theoretically the mind of a Synth could be scanned and copied into another brain, to create an exact copy of a Synth's mind, with all its memories, capabilities and personality. This would be possible, if the Brain wasn't a complex blackbox that is almost impossible to read and scan without killing the Synth in the process. Should any future technology arise that allows the scanning of Synth brains, an ethical debate about the morality of copying minds would be sparked. Regardless of the outcome of such debates, at the current level of technology it is not possible to copy or transfer a Synth's mind.