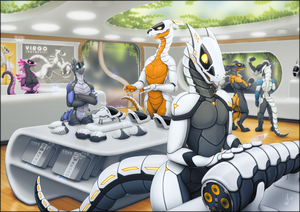 Synths are fashion conscious in their own, synthetic way. Much like organics tend to wear clothes, style their hair, tattoo their skin and wear piercings, Synths have their own ways of expressing themselves through the modules they wear. Due to Synths being able to mount a great number of modules, they can get very creative in how they choose to style their looks. All across the Outer Rim Synths are able to browse shops of various sizes, both on location and online, offering different styles, interests and some of them even catering to special body shapes, like Synths with Taur or Naga frames.

While Synths can have very unique looks, there are some common elements that are present in most designs, no matter how outragous and unique they are. 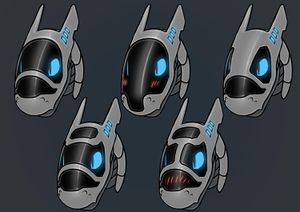 Visors are probably the most important part of a Synth's anatomy. They are what communicates emotion to others through facial expressions, acting as the Synth's face. Therefore special attention is given to the shape and style of the visor, making it the easiest way of differentiating Synths from each other.

Synth Visors can consist of multiple "windows", which are 3D screens that display the Synth's eyes, as well as a number of other animations. The number, shape and arrangement of these windows gives each Synth visor its own, unique look. Some Synths prefer to have one, large screen instead of multiple smaller ones, others prefer to have two or more screens on either side of the visor, with no screen in the middle. Different producers of visors also offer different styles, with some of them being unique to certain brands.

Visors often come with a set of horns, or antennae. They are optional and come in many different shapes, but are quite popular in their default 2-horned form. They often have status lights on them, both as a functional design element and because it is considered fashionable.

A Synth changing colours on the fly

Synth skin has the ability to change colours depending on the blueprint the Synth has equipped. This can lead to colourful, expressive displays, with many Synths trying to stand out of the crowd through their colour choice. However, once a Synth chooses their colours, most of them tend to stick to the same theme, often matching the colour of their eyes with the main colour of their skin and extending their colour theme to any additional limb modules they may equip.

Skin colours can be any colour on the visible spectrum of light. The Synth's skin pigments are even able to form reflective layers to appear metallic or to achieve other effects, like pearl, bismuth or gold. Pigments can also glow, which allows for glowing parts of skin. 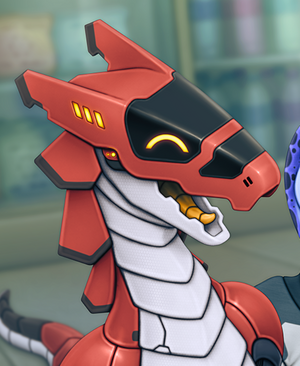 While the majority of a Synth's body is typically soft to the touch, due to their muscle and battery tissues being soft, there are parts of a Synth's body where it is often fashionable to have hard plates installed. This is particularly often the case around the back of a Synth's neck. Synth neck plating does not have to be hard or rigid for any particular reason, but it has become a trend among Synths to install hard plates, sometimes even with spines or spikes sticking out in the back.

Some Synths also have hard plating along their spine and all they way along their tails. This is seen as a matter of taste though, since soft, squishy tails are also popular, both among Synths and organics.

Synths typically have several glowing elements on them. Even those who prefer to go with more humble and less colourful looks will typically have at least some coloured lights on them. A Synth's eyes are the easiest example to name, but status lights in various shapes are widespread as well and have become an unmistakeable feature of Synths. The colour of glowing elements can change easily, but somehow most Synths prefer to stick to one colour through most of their lives, since it is something they can easily identify with and it helps with identifying different individuals.

In some cases glowing elements are a very prominent feature in a Synth's design. Due to the ability of changing their skin colours, Synths are also able to wear glowing skin patterns. Pigments react to electricity led through them by glowing in various colours, allowing for very colourful, expressive displays.

While glowing features look pretty and allow you to express yourself in a unique way, it is good to keep in mind that some organics react badly to flashing lights and colours. Be mindful of your organic brethren and don't give them seizures. Try to avoid repeating, flashing colours. Flashing elements must never flash at a frequency of 15Hz to 25Hz. Synths with flashing elements that operate within such a frequency interval can be held accountable for endangering others.

Wings, Fins and other additions

Synths are not just flexible in their looks, but also in their modes of transportation. Some Synths take particular interest in the ability to fly, swim or dive. Some jobs even require such abilities as a prerequisite. It is therefore possible for Synths to mount wings, personal flight engines, propellers, fins and many other modules to allow them mobility in a multitude of heights and depths. Such modes of transportation take a lot of energy, requiring Synths to mount additional energy supplies as well as a license to operate these advanced modules. They first need to learn how to fly safely in a simulator before being allowed to take to the skies on their own. The same goes for diving, due to the risks involved.

Wings, fins and engines are seen as slick and fashionable, adding the sense of speed to a Synth's looks. They are considered to be very attractive, leading to some Synths mounting non-functional wings to impress others for their looks alone.